Prior to interviewing the illustrator of this new book -The art of war: “Brothers of the Gun” for Huck Magazine, I’m investigating how this innovative book serves to highlight the struggles of Syrian War survivors with dignity and depth. 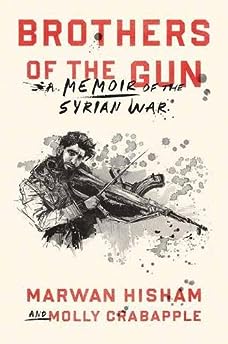 Marwan Hisham’s Brothers of the Gun is a powerful and important memoir about coming of age while the Syrian civil war raged around him. Molly Crabapple’s illustrations are poignant and complement the prose perfectly.

Booklist wrote of the book:

“Along with Crabapple’s haunting images, the author’s words offer both an elegy for what has been lost and an angry plea for all that remains. This is memoir at its most powerful, ensuring that we cannot forget lives we never knew.”

In their own words, here is Marwan Hisham and Molly Crabapple’s Book Notes music playlist for their book Brothers of the Gun:
https://open.spotify.com/embed/user/largeheartedboy/playlist/5EwoLRat1RRwP66OUYqpVQ
Molly Crabapple
Spanish Bombs – The Clash

It’s become a cliché to compare the Syrian civil war to the Spanish civil war. After all , the two share mendacious external backers, foreign fighters (idealistic and otherwise) and cities stoically going about life beneath bombs brought from thousands of miles away. Both began when working people attempted to grasp social and economic justice, only to be savagely put down by the forces of reaction. “Spanish Bombs” is a punk rock tribute to doomed Spanish Republic, and it made apt listening when I drew the war in Syria.

Abdel Halim Hafez was the Frank Sinatra of Cairo’s Golden Age, a tuxedo-wearing, honey-voiced singer of ultra-sophistication, backed by an orchestra playing Arab and Western instruments. In this song, from a poem by the famous Syrian writer Nizar Qabbani, a worried young man visits a fortune teller. In his coffee cup, she sees a vast epic of love and death.

In April, 1961, a group of Cuban exiles landed on Playa Girón – the Bay of Pigs – and attempted an epic fuck up of an invasion. 14 years later, the communist Cuban singer Silvio Rodriguez released the song Playa Girón. The song doesn’t mention the Bay of Pigs incident. Instead, Rodriguez writes the most apt, poetic lines ever about how all the intellectuals, historians and poets cannot match the eloquence of the tough working men on the a fishing boat in that famous bay. I like this song as a reminder. Any writer, with any honesty, realizes that their words capture the barest fraction of the vivid, bleeding humans that they portray.

Just after we finished Brothers of the Gun, Hurricane Maria hit Puerto Rico, and I started to go back to an island I hadn’t seen since childhood visits to my grandparents. I first heard this song in January, when my father and I hitched a ride with an old independantista in Jayuya. Chuito’s voice, rich and defiant and witty and deep as the ravines between those mountains, grabbed me and has held me very since. Every book is formed from blood, and turning in a manuscript is always a loss as much as a relief. Going back to Puerto Rico helped fill the emptiness Brothers of the Gun left. The old independantista gave my father burned Chuito CDs that I have played daily ever since.
Marwan Hisham
The Partisan – Leonard Cohen

“The Partisan” is the song I most related to while I was in the process of writing Brothers of the Gun. Words like border, gun, shelter, soldiers and graves became familiar parts of my writing vocabulary. The song evoked in me the weight of history, mixed with nostalgia for my war-torn country.

Wind of Change – The Scorpions

I listened to this song over and over before knowing the significance of its words. The wind of change is always alluring to humans, and it was just what we in Syria needed. But change of course doesn’t always mean change for the better. Maybe that is the only thing we Syrians share with the Russians.

I listened to “What’s Up” for the first time with Tareq and I have loved it ever since. I’d be lying if I said I thought about it at that time as a more than beautifully-performed song, for my English was too primitive to get the lyrics. The song can be understood in contexts other than the obvious one and still resonates as a cry in the face of any unjust “brotherhood” of the powerful.

By God, Every Time The Sun Rose or Set – Various musical groups

This jewel of poetry has been sung by many different singers but is always sublime. Its writer, the famous mystic Sufi Al-Hallaj, was born in what is now Iran and travelled to Baghdad. His provocative exclamations made him one of the most controversial figures in the history of the Abbasid empire. His words finally condemned him to death. Al-Hallaj ends his poem thus: What cause have foolish people to blame me? My religion is mine, and their religion is theirs.
Marwan Hisham and Molly Crabapple and Brothers of the Gun links: